We did the math before deciding a route through Thailand and decided it was better to head to Ko Lanta Island on the west coast for some R & R before heading straight up to the north of Thailand to our border crossing at Mae Sot into Burma. Ko Lanta is an island off the west coast of Thailand and based upon our research seemed to be the island to stay on not to touristy on the south end and we could get the bikes over on 2 ferries at the cost of $2 each. We were surprised at the amount of tourists but ended up happy on the south end in a great little beach side resort to enjoy our first official rest day. It was difficult to leave Ko Lanta but we were happy to be back in the saddle and once back on the main land our next leg took us through Khlong Phanom National park with perfect tight corners and limestone mountains literally leaping out in front of us, not the longest road but given our constant freeway journey since landing in South-East asia it lifted our spirits. We made it as far as Phetkasem to find a hostel within walking distance to the beach and lay our heads for the night. 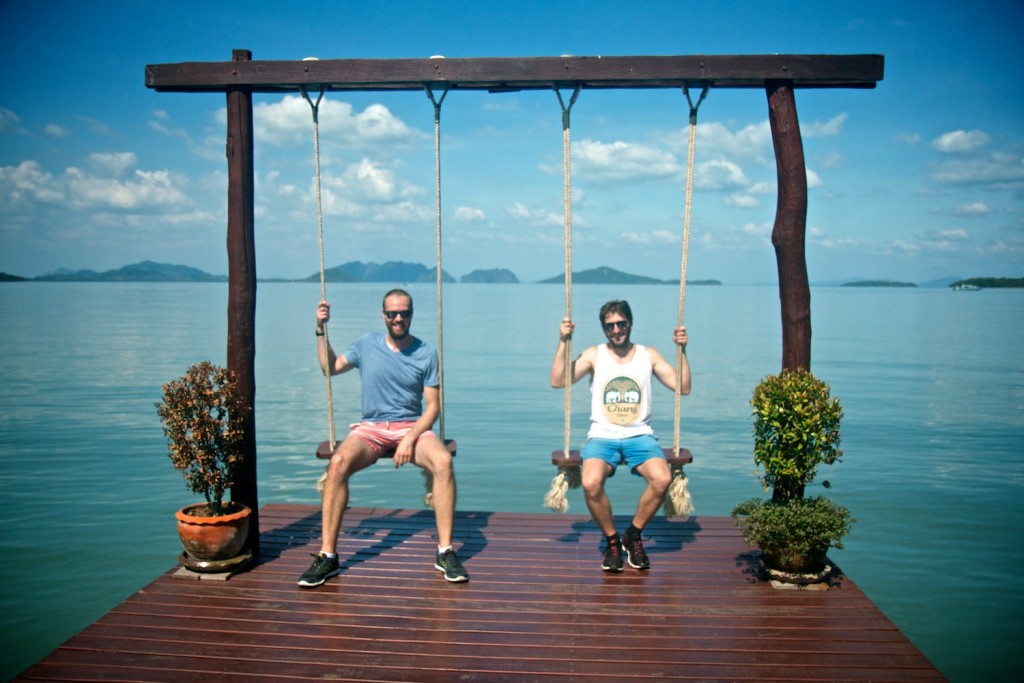 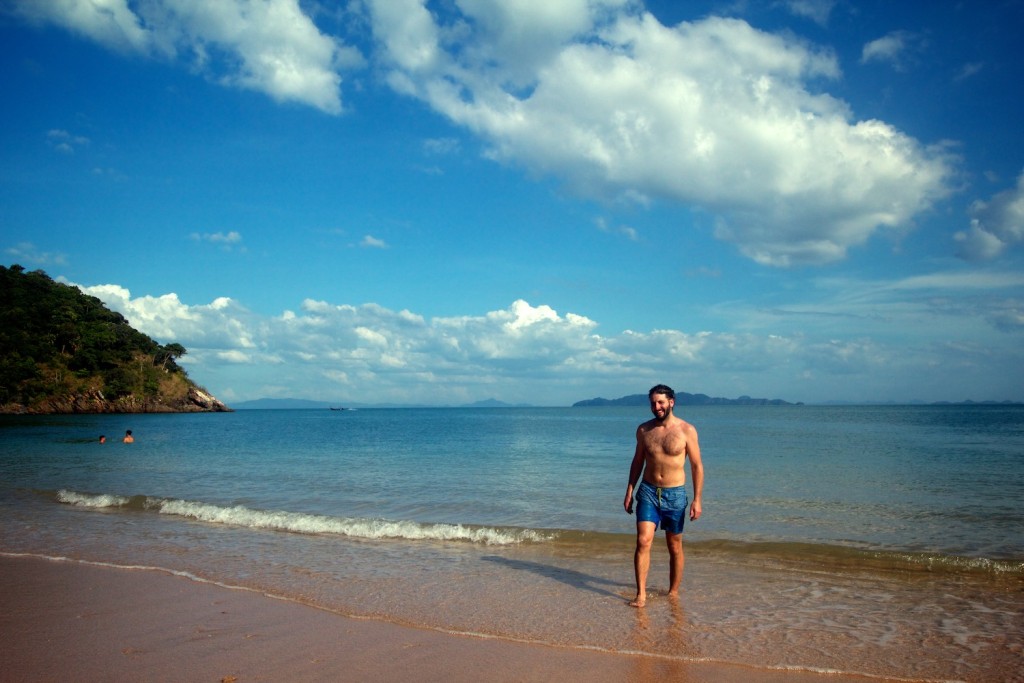 Up bright and early for a swim we made good time the following morning taking us through to the east coast, the distance surprising us as the land is so narrow only a small 70klm’ls from west to east. With a quick consult of the map we realised Bangkok was unachievable but a small town on the east coast that Jimmy and Monica had stayed last year would work and we ended up staying in the exact room they had shared months earlier. Next stop Bangkok for a much-needed battery charger for Jimmy’s camera, given our little interest in city traffic we exited as soon as possible to meet with Bangkok Police on a motorway only for cars and trucks and we were instructed to turn around and ride against oncoming traffic to get off! 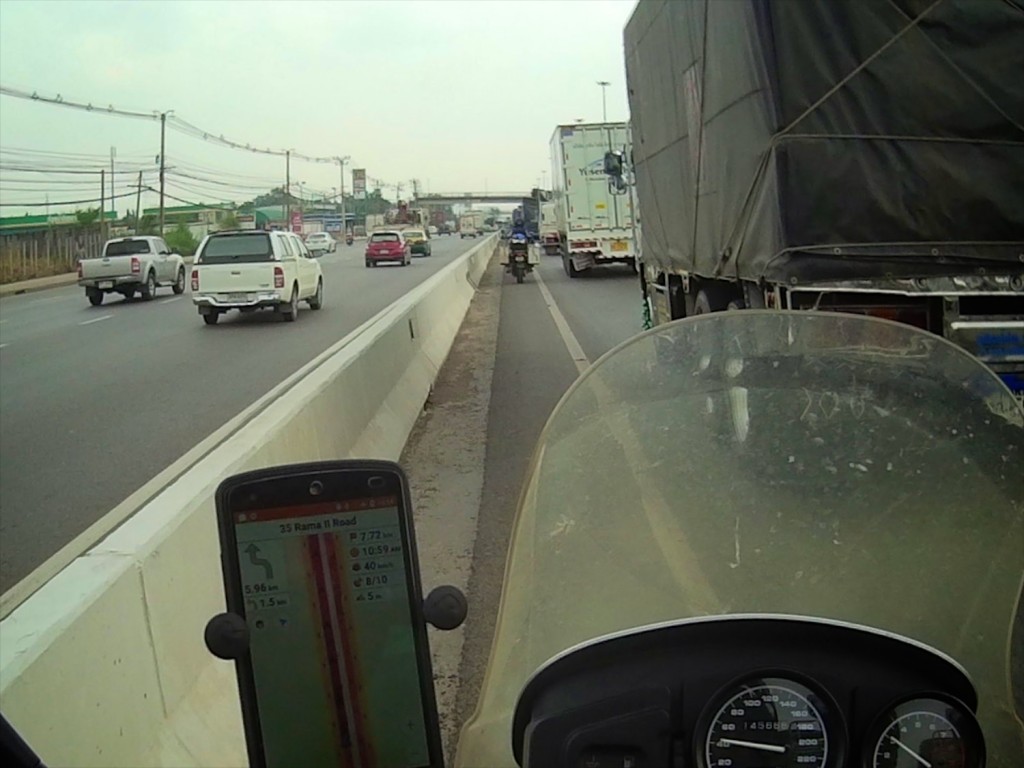 Stuck in traffic on the outskirts of Bangkok 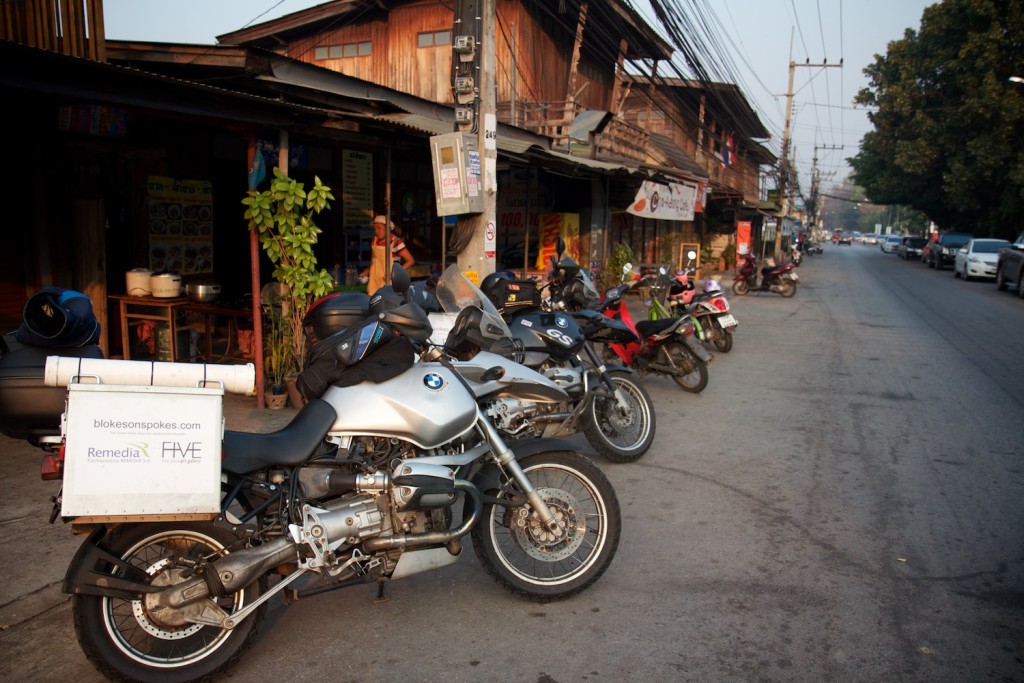 Our breakfast restaurant in Kamphaeng Phet 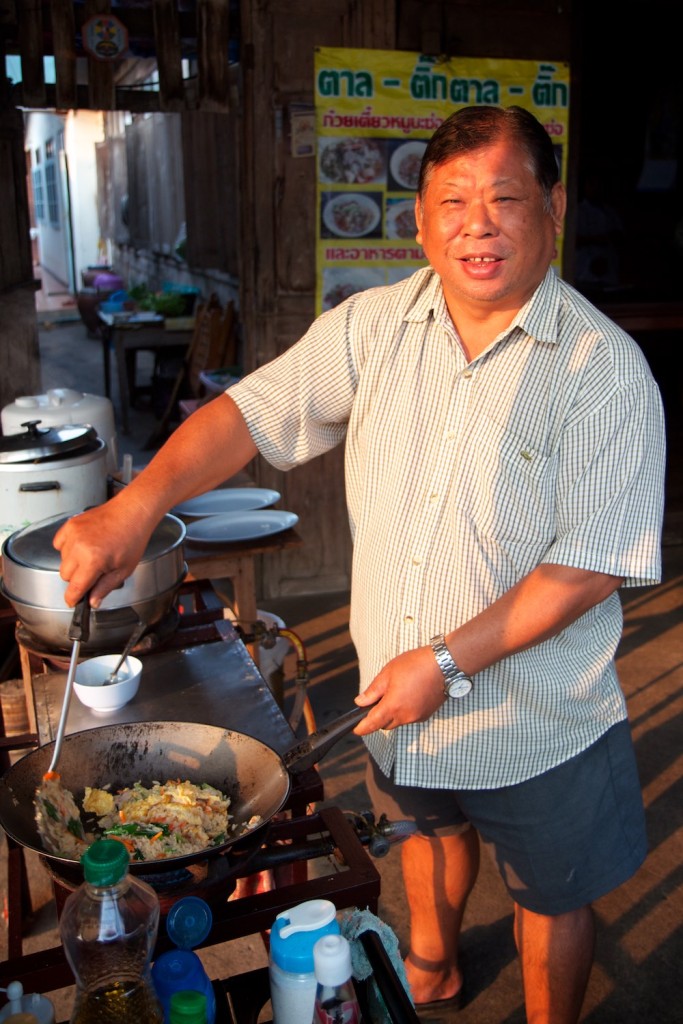 Our chef at our breakfast restaurant in Kamphaeng Phet 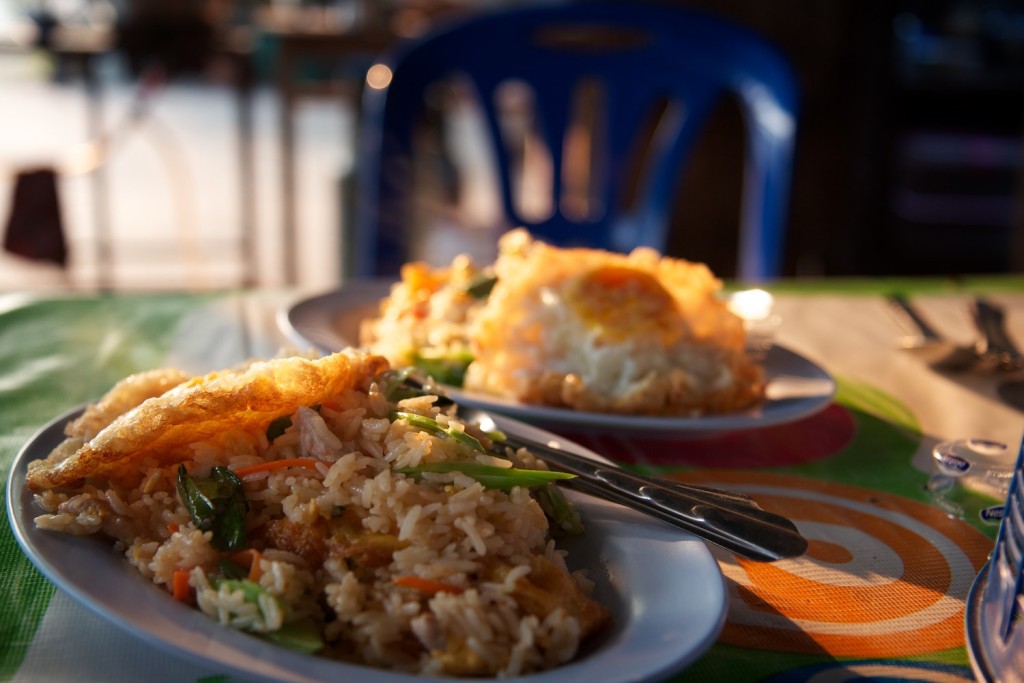 Our breakfast in Kamphaeng Phet

Matt who we met over a few beers had recommended a road south of Mae Sot that weaves its way to the largest waterfall in Thailand high in the mountains in Umphung a 170klm journey taking us up about 2000 m with stunning scenery and views through to a much-anticipated Burma. Jimmy and I had a huge amount of fun on the way up over 1000 bends leading us into Umphung to a much deserved beer and given our lack of private space we decided to splash out at $8 a night on a room each. 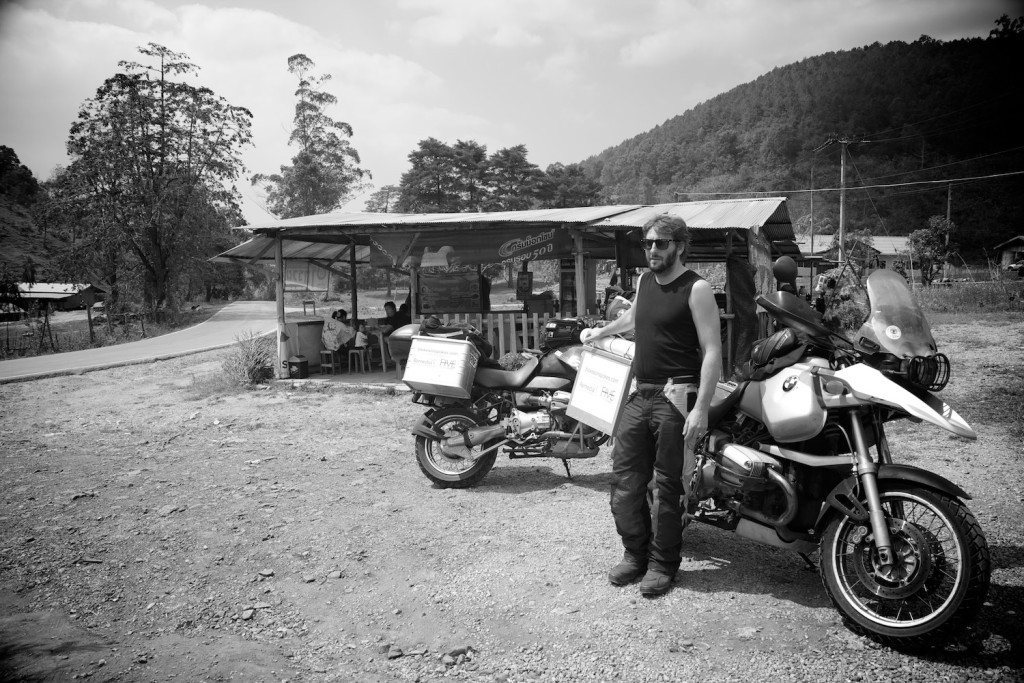 Lunch off the beaten track enroute to Umphang 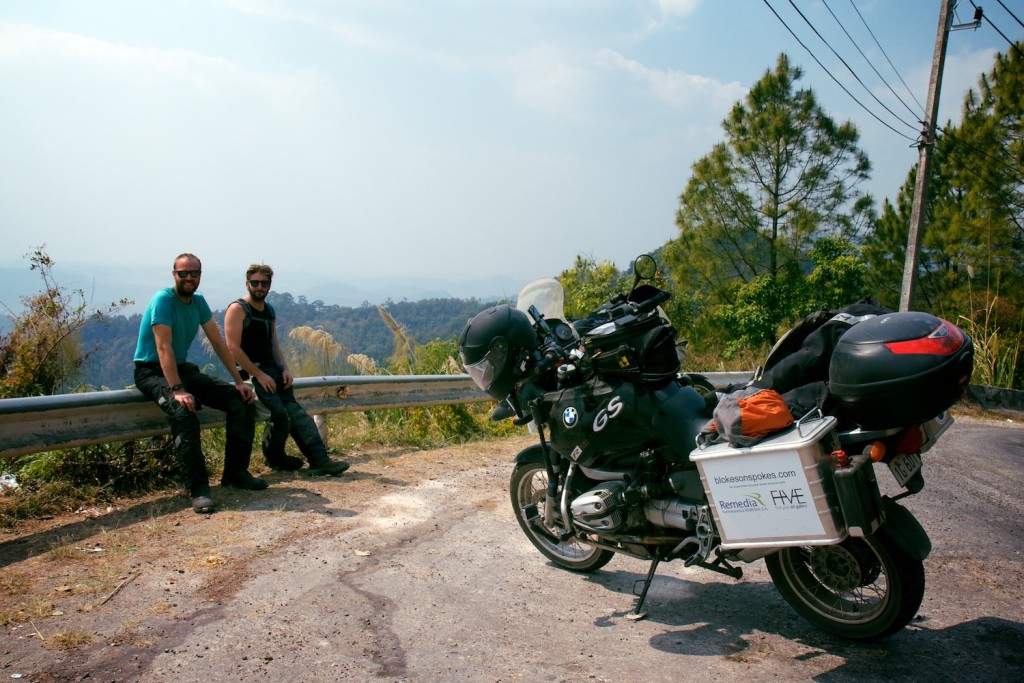 We left Umphung in search of the waterfall, we had heard that one could only make it with a local tour company but given we ride adventure bikes that wasn’t going to stop us! We made our way out to the national park and proceeded to buy tickets to get in but to our disappointment they wouldn’t less us in on our bikes. We consulted the map to locate a smaller waterfall 30 klm down the road and decided to try our luck, the paved road came and went and we ended up along way off the beaten track onto 15 klm’s of dirt, mud and ruts that eventually broke the forces of gravity with us both dropping our bikes at low-speed. We dusted off our pride and headed back in disappointed to not have showered in a Thai waterfall. 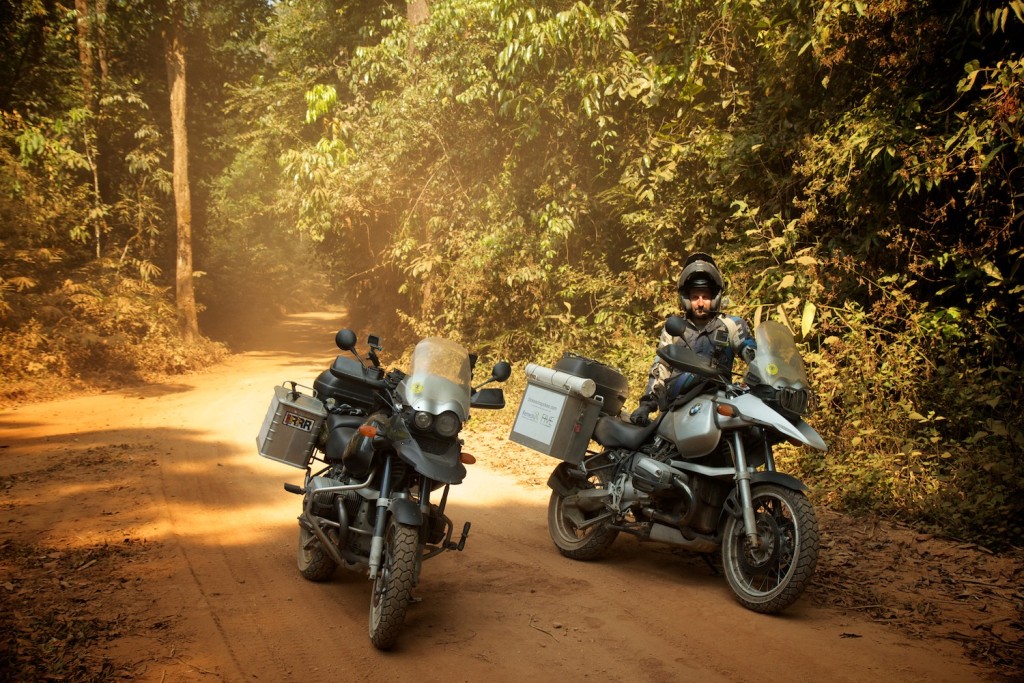 Getting dirty whilst trying to find a waterfall 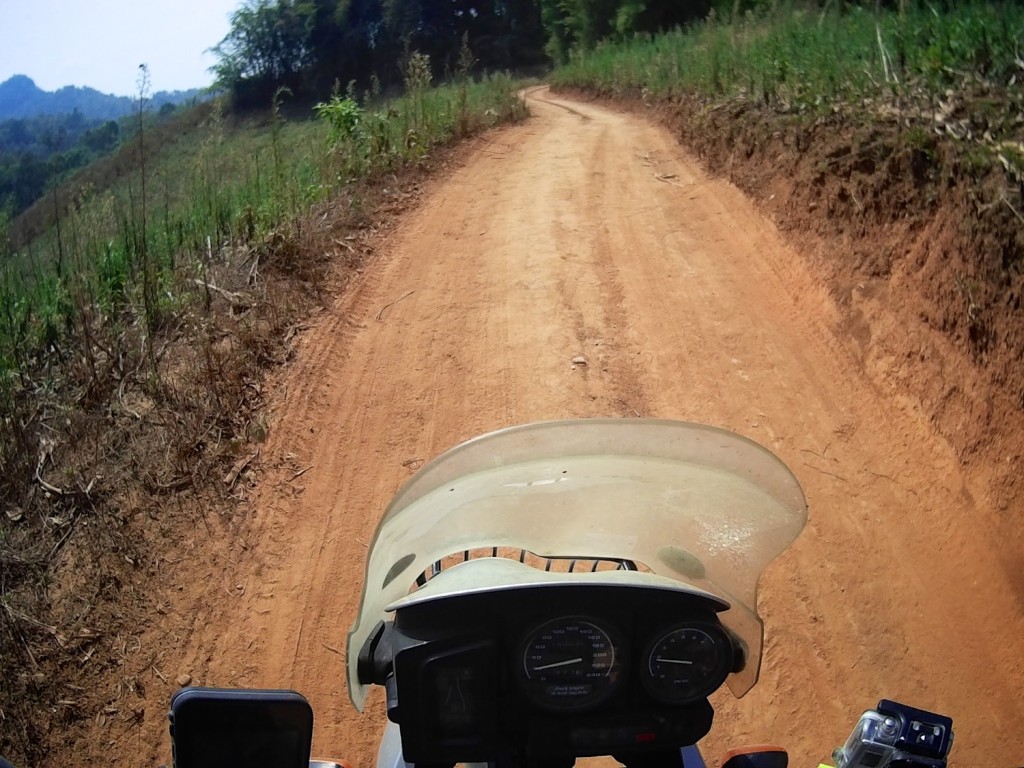 Off the beaten track

With all the dirt riding in the morning the concentration needed for the journey home wore us down, the road was awesome but not consistent in condition and you had to stay alert to avoid any mishaps. A short stop at the halfway point found some other big bikes, BMW’s and a few Harley’s why you would take a Harley along this path astounded us but we soon learned the Harley rider owned Bangkok Harley Davidson so I guess he didn’t have a choice! Great to meet other riders on the road, always up for a chat about our journey.

Mae Sot was surprisingly big and initially I was keen to check it out but soon learned that it was a typical border town and mostly consisted of retail trade with Burma. A good night sleep with an early start to cross the border into Burma the following day and meet up with our tour. 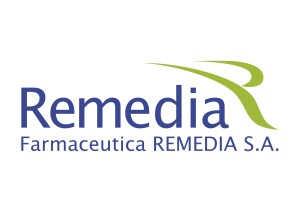 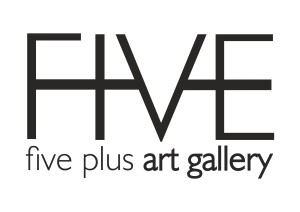